Kona Tuna was founded in 2018 by an enthusiastic fisherman who is passionate about marine life and preserving nature. His passion and concern of the current ways of fishing led him to establish his own company and promoting sustainable fishing ways. Within one-year Kona Tuna have managed to seize a large market share in the local Libyan market, and gained respect and popularity within the Libyan community.

Kona Tuna is committed to sustainable fishing practices and continuously sponsors initiatives as well as several non-profit organization such as Al-Zarqaya NGO that spreads awareness within the fishing community and the public about the effects of disposing fishing material in the seas, and using illegal practices such as blast fishing which is very harmful for the ecosystem.

KONA relies on a fishing method called the pole and line method. Although it is not the cheapest and there are not large quantities of fish available in this way, but this is the best way to preserve marine life, as no other unwanted marine creatures are mistakenly caught, such as sharks, dolphins, and others.
This method also supports low-income fishermen who cannot buy large, expensive fishing vessels. And the use of small boats is less harmful to the oceans and marine environment.

Kona Tuna currently has very high commercial growth targets as well as the social objectives of generating job opportunities for Libya’s young population and improving the well-being of Libyans in an environmentally conscientious manner.
Recently the company has sponsored major sports teams, kids sailing clubs and environmental charities to promote well-being and environmental awareness in the Libyan community, and will continue to so. 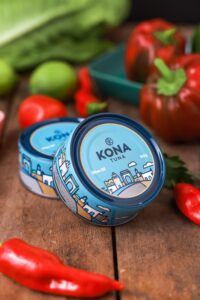